So, the old fox has finally thrown in the towel

Regular readers have been asking - well alright they haven't actually submitted any comments in a few years, but I know my audience well enough by now to guess what's on their minds - why I haven't done a piece yet on the closure of Vault-Co.

I suppose I was giving Texas Arcane a sort of a grace period, to make sure that this wasn't yet another temporary hiatus. It would appear that this time however, for reasons unknown, he really has pulled the plug on his long running Vault-Co blog.

Did he suddenly go into hiding from shadowy figures in high places because he was getting too close to the truth? Did he meet an untimely demise because the powers that be wanted to shut him up? Did he get a full time job? We don't know, and we may never know. All we know for certain is that there isn't any more source material to mine parodying of my original content here at Fault-Co.
You'd think I could finally settle back with a cup of Tetley, but it's a Pyrrhic victory in some ways; like that skit from Family Guy where Wile E Coyote finally caught the Roadrunner and then didn't quite know what to do with his life from there on out.
Honk if you're still alive, Tex. (Asking for a friend.)
Posted by Mex Arcane at 2:18 AM No comments: 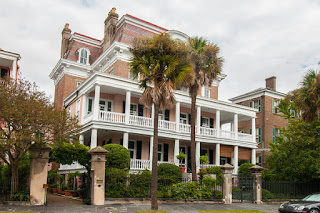 Well he didn't actually live there but it's where they filmed the US civil war period mini-series North and South in 1985, in which the late actor had a starring turn as the dashing South Carolinian plantation owner Orry Main.

Of little practical use in a nuclear war but with 17 bedrooms, they're only asking $8 million.
Posted by Mex Arcane at 3:18 AM No comments:

What was your new year's resolution? Mine was to retire.

You've got to wonder how our dreams often never come to fruition.
Posted by Mex Arcane at 3:00 AM No comments:

...quite unlike Vault-Co, a formerly prolific blog that can only muster an update every once a fortnight or so these days.

I guess after twenty years (it's always been twenty years hasn't it?☺) there's not a whole lot left to say. Their marketplace of ideas is having some supply issues.

My contract at work winds up in a couple of weeks - something about productivity levels. Economic rationalism. Anyhow, I've been spending my lunch breaks exploring the staff-only areas out back of Kmart - you know, the places that are meant to be off-limits to the general public. That was when I stumbled upon some really hair raising shit, which I thought I'd better record here for posterity in case I meet with a suspicious accident any time soon.

You see, I notice things. Always have. It's a gift. Where the common man sees a doorway to a loading bay, I see a gateway to another dimension. Cleverly disguised as a down and out up and coming game developer in a pair of ripped jeans and a Van Halen shirt, I snuck through the loading bay and down a deep, winding corridor out back of the Frankston Kmart, just behind the discount lingerie aisle. I figured if anybody asked me what the hell I was doing back there, I'd just tell them I'm a local crack addict on the prowl for an eight ball.

Maglite in hand, I strode down a flight of concrete stairs and through a winding maze of dark corridors, using my Priceline card to jimmy open the occasional security door. Approximately eight floors below ground judging by the air pressure and relative humidity, I found myself in a chamber adorned with swastikas and a large satanic looking mural on the far wall. As I edged closer, two figures suddenly emerged from the corners of the room beyond the reach of the suspended fluorescent lighting.

The hairs stood on the back of my neck as my worst fears were realised - I had been sprung, by two Kmart employees. I'd guess about late teens / early twenties. "Chad" and "Mykayla", going by their name tags.
"We have an intruder in sector seven", spoke Mykayla into her shirt collar. "Australopithecine appearance. Unarmed. Caucasian. Thirties. About 6'2". Deep, soulful blue eyes with kind of a suggestive glint to them that sorta says 'hey girl, come over here'. Van Halen tee shirt. Beard. How should we proceed?"
Realising that the situation was critical, I had to think fast. "Wassup niggas? Hook a bro up with a couple primos? Sheeeyit!"
"False alarm", called Mykayla. "Just a lost local tweeker."
Their cold, fixed gazes were replaced by a veneer of saccharin retail deportment.
"I'm sorry sir, we don't carry that product." said Chad. "But we do have 'LA Ice' Cola in two litres. It's chemically similar. Aisle five."
With a "cheers bro" and a thumbs up, I was on my way.

I don't think the illuminati have been tipped off yet that I have uncovered their elaborate doomsday shelter concealed beneath a popular retail outlet, but that's exactly what we're looking at here. I'm gonna blow this whole thing wide open.
Posted by Mex Arcane at 6:29 AM 2 comments:

I just can't be stuffed any more.
Posted by Mex Arcane at 3:27 AM No comments:

This site is officially non-fattening but with the same great taste as of 2018. It is devoted primarily to generating me fame, fortune and a horde of admirers. All readers are welcome as long as you're at least a 7.5 on the HB Scale. Gracias.

Mex Arcane
I am the hombre who woke up from a siesta to get a beer, in a world of gringos. If you're awake, gimme $2 and I'll wash your windshield. If you're asleep, see to it you don't come here or you'll hear only mariachi music.